The objective of the Functional Testing activity in gCube is to ensure that all the components gCube services and public interfaces:

The goal of functional testing is to assure the appropriate quality of the gCube software. Testing, in general, is not a procedure to find bugs, but to check that the software works in accordance with the specification, architectural and detailed design documents. In addition, the testing activity has to ensure that the software is easy to use and gives appropriate response in the case of wrong usage or defects that cannot entirely be eliminated. Testing is planned according to these goals.

The procedure starts by analysing the software artefacts included in the release along with their software dependencies. This task is carried out manually by the portal manager. Each portlet artefact which is released must be part of the functional testing procedure. Also, if anything in the dependency chain of a Portlet X is released, then X has to be functionally tested too.

will be: $portlet_name_folder. Every developer will create the actual testing plan into Material/$portlet_name_folder including by adding additional files required for the test (e.g. cvs_files). To describe the functional tests, the developer will use the Portlet Testing Plan Template; this file will be pasted and completed into the Release folders by the testers. A Task (Redmine Ticket) will be assigned, by the Release Manager, to each portlet developer.
The Releases directory contains a folder for each gCube release containing the tests to be executed. The Portal Manager creates (in this directory) the gCube release directory and the portlets directories related.

The Release Manager will ask to every partners to suggest the persons that will form the testing team.

The Tester Manager creates the Master and the SW Test Ticket component (the procedure is inspired to the Configuration Release Ticket).
The fields to fill for the SW Test ticket are:

The flow is showed in the following figure: 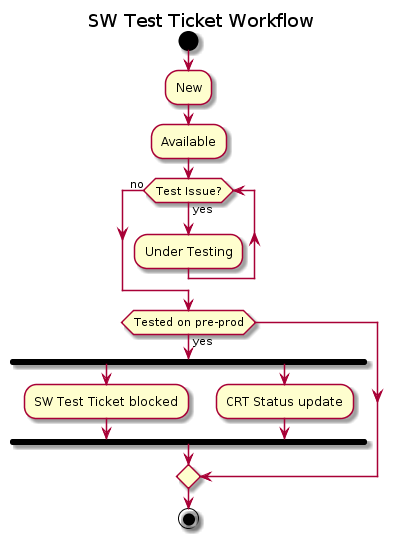 For the testing of each release the Tester Manager copies from that template. In this way, only the sprint is changed (in one action thanks to the multi-selection).

The SW Test Portlet are available after the services are deployed on pre-production and after the Deployer Manager following the procedure as reported in the (Releases Integration).

The SoftWare Test ticket will be opened by the Tester or Portal Manager and assigned to the testers (the procedure is similar as for the release tickets).

The pre-production infrastructure is provided for the functional testing hosted at CNR.

The information and statistics for the Functional Test Portlet (for all release involved in it) is reported in the: Test Log section.

The functionality testing activity foresees the involvement of the following roles:

The Tester is responsible:

The details about the assignment of the testers (for each partners) are hosted on the Role Assignment paragraph.

The details about the role of the developers are hosted on Developers wiki page. The developer is: