ETICS stands for e-Infrastructure for Testing, Integration and Configuration of Software. ETICS is an on-line collaborative service for managing software projects by managing their configuration, enforcing quality standards, building packages and testing them in environments as close as possible to real-world infrastructures. The ETICS tools can be used to run remote builds and tests on multiple platforms at the same time. 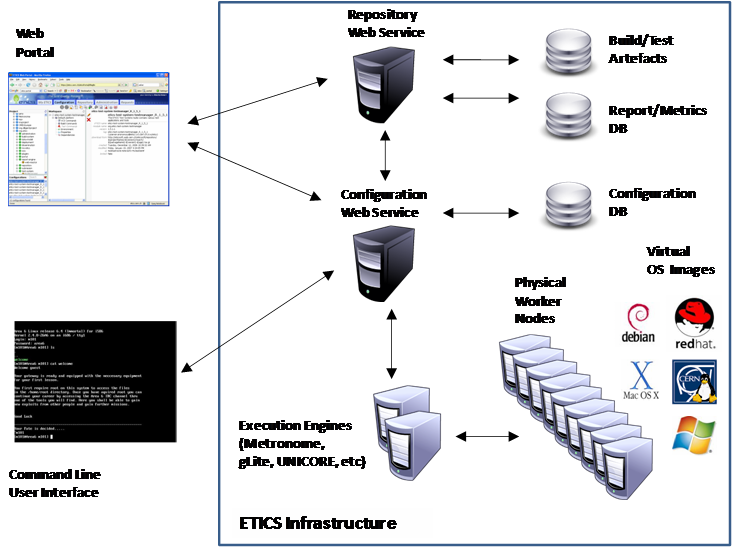 The main architectural components of ETICS (depicted in the figure above) are:

How to create ETICS configurations for gCube components

This sections is meant to provide operative instructions about most relevant aspects of creation of ETICS configurations for Maven-based components.

Version field of the ETICS configuration must match the version specified for the Maven project in the pom.xml, excepting for the "-SNAPSHOT" postfix. The match will be checked during the invocation of mvn to guarantee that ETICS versions are always in sync with Maven versions.

Sample build commands for a maven-based component should look like the one in the picture below:

gCube services components are usually multi-modules maven projects (see gCyve Service development guide for more information) containing a module for the stubs, one for the service and optionally one for test-suites. In ETICS a service must be modelled with one ETICS component for each Maven project's module.

For each ETICS component, build commands should contains commands to deploy only the correspondent Maven module, and, if needed, compile the other modules needed by the first.

Picture below shows the typical build commands for the stubs component. First the mvn deploy -N is invoked to deploy the project's parent pom. If not executed, stubs' compilation will fail because parent's pom will not be resolved. Then the mvn deploy -pl exampleservice-stubs is invoked to build and compile only the stubs module.

Finally, picture below shows the typical build commands for the service component. Since the service module of a gCube service needs the stubs to be compiled locally in order to generate the gar archive, before execute the mvn deploy -pl exampleservice-service it is needed to also build the stubs mvn install -pl exampleservice-stubs. Note that it is not needed to invoke target deploy for stubs, since they are deployed already by the stubs ETICS' component. The parent's pom will already exist in the local repository (deployed by the stubs' component) and, thereofore, it is not needed to compile it again. 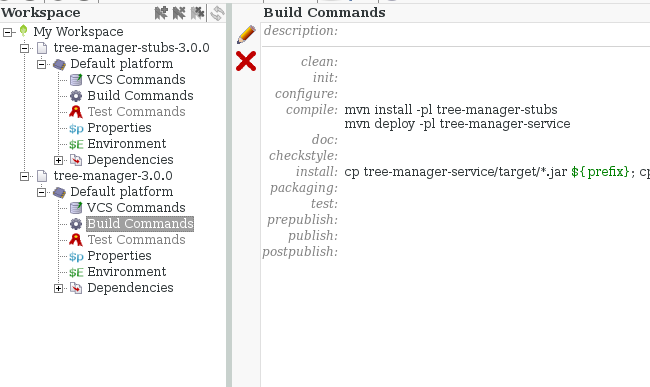 The configuration must directly or indirectly depend on the ETICS configurations of all gCube components that are specified in the POM, including maven-builder. This guarantees that at build-time all dependencies requested by the pom.xml have been already compiled and installed on the Maven's local reposiotry.

Dependencies on third-party components available in Maven Central (or other Maven repository specified in the POM) do not need to be configured in ETICS (i.e. Maven repositories replace ETICS externals).

All dependencies must be declared of type dynamic and the actual version will be resolved at project level.

Example of dependencies for a Maven component:

Unlike Ant-based components, Maven components do not use the CLASSPATH variable for compile-time dependency resolution, but rely on the Maven local repository. This means that the Environment section of Maven component's configurations will be empty (unless other environment variables has to be set for other purposes).

There exist an exception, though. If the component's artifact is meant to be used as compile-time dependency by others Ant-based components, the artifact produced by the Maven build needs to be exported in the CLASSPATH to allows the Ant-based component to find it. Only in this case the Environment section will contain an entry to add to CLASSPATH the artifact produced. It is suggested to use following convention:

Tip: you can easily find exactly which artifact is created during an ETICS build by searching in the build report of the component for the line "Installing /home/gbuilder/catalogueoflife-spd-plugin/target/catalogue-of-life-spd-plugin-1.0.0-2.12.0.jar to..."

How to submit remote builds of gcube subsystems/components

In ETICS Portal, to access the Remote Build submitting form (see picture below) just right-click on the configuration you wish to build and then select "Remote Build..." from the contextual menu that will appear. The submission form is shown below: 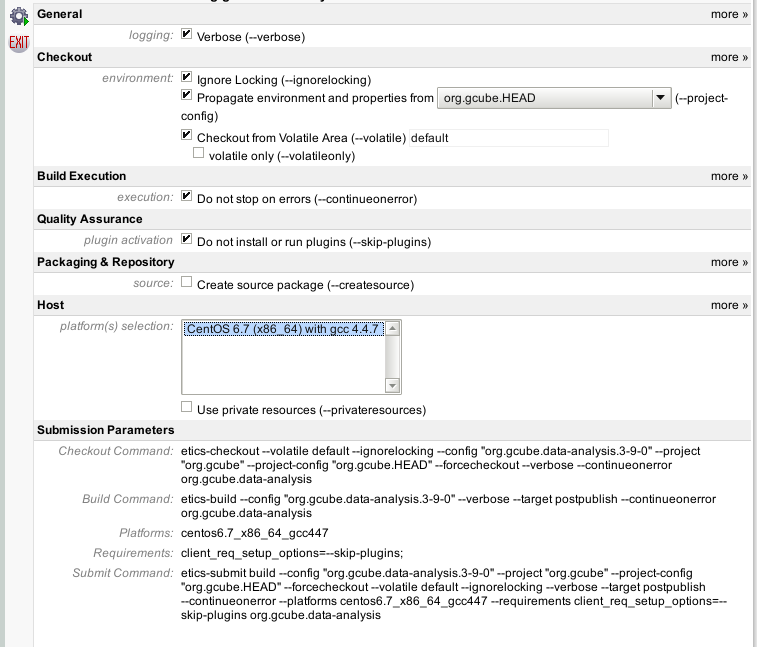 The most common options to set for gCube builds are listed in the table below.

Once options have been set, just click on the submit icon (top-left of the submission form) and the build will start. You can keep trace of your builds in the 'Submissions tab of ETICS Portal.

The ETICS Issues section (reachable from the top-bar, on the left) lists the issues found in components during the build. Issues are related not only to the result of the builds but also to quality guidelines defined by projects. Some issues specific for gCube have been defined (e.g. compliance of README files) and are reported in this list.

As depicted in the figure below, the user can group (in the top-right of the page) the issue list by different attributes: module, priority, type and owner. A summary for each group is displayed at the top of the page reporting the type and subtype of the issue, the total number of issues in the group and the sum of the technical debt computed for the issues.

Under the groups summary, there is the list of all issues ordered by group. By clicking on the issue, the details are displayed (see figure below). 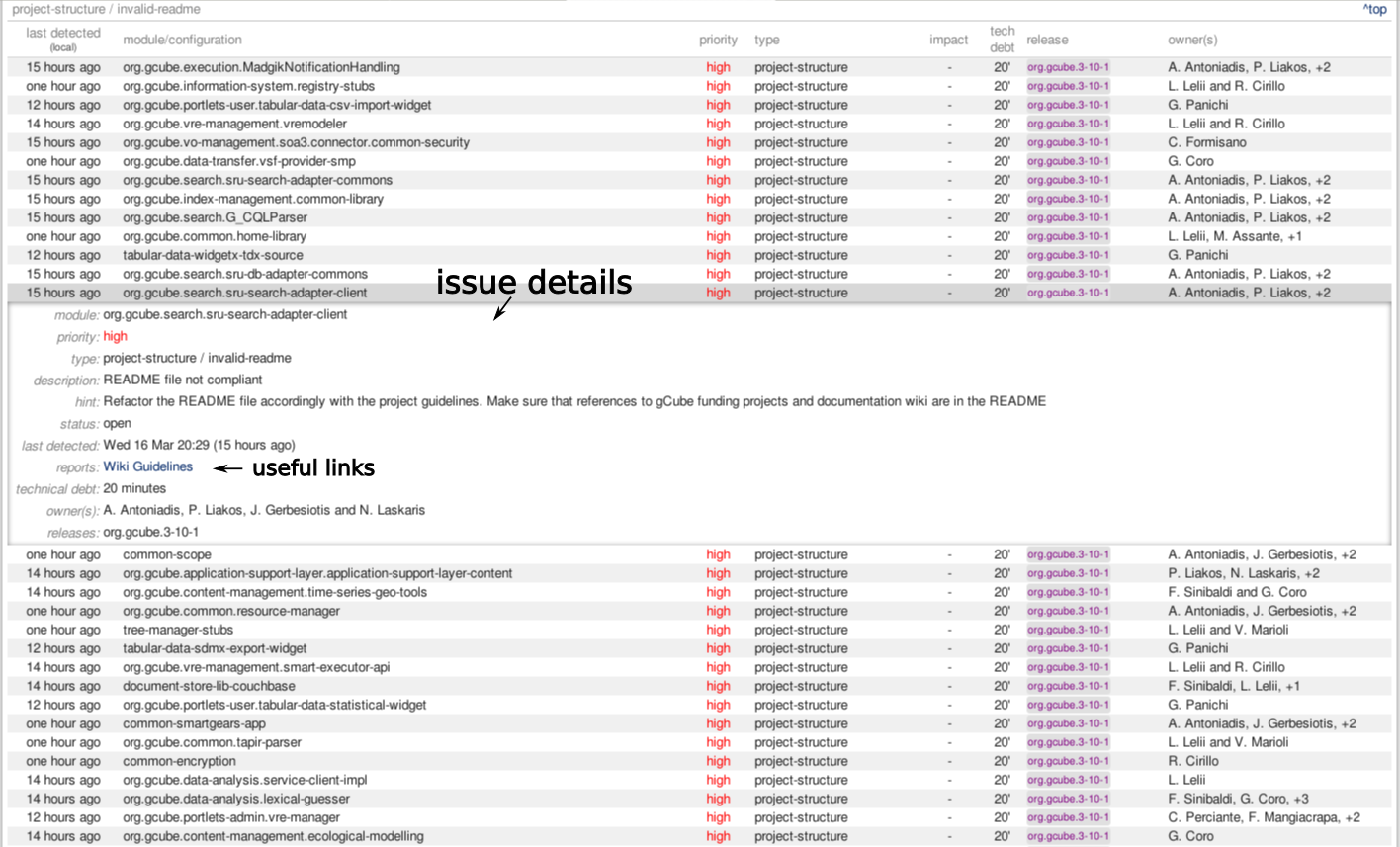 ETICS runs a number of checkers during the remote builds and creates the discovered issues at the end of each build. An issue is automatically closed by ETICS when it runs again the build of the affected component and does not find the issue anymore. Closed issues appears with in Straight-through style for few days and then disappear completely.

Along the remote builds submitted by the users on demand (see here) ETICS has also the capability to trigger builds when specific events occurred.

There are two types of events monitored:

When one of these two events occurs, ETICS look for the ETICS Configuration(s) associated with the event and request a build for that configuration. The build submission is delayed of 5 minutes from the event. During this time, any other request of building the same configuration is ignored. This avoid multiple builds when several changes and/or several commits are done in a very short period of time.

At the moment the user that made the change is not notified when the build is launched and/or finish.

ETICS does not support the removal of modules (projects, subsystems and components) if they (or they children) have one or more locked configurations.

However, in big and long running projects some modules could be abandoned, replaced by new ones or dismissed. The number of dismissed modules can increase a lot and "pollute" the GUI with several unneeded modules and configurations.

For this reason, there is an option to hide dismissed modules in the ETICS GUI (only hide, they will remain in the database).

How to define dismissed modules

To flag a module as dismissed, it is enough to select the "Set Dismissed" action in the contextual menù in the project tree. The action will be enabled only if the user has the edit privileges on the module. 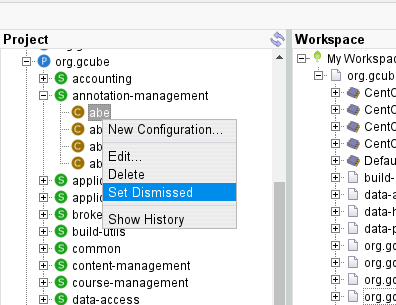 How to show/hide dismissed modules

To show/hide dismissed modules in the ETICS GUI there is a toggle option. It is located in the settings menù, in the toolbar as shown in the figure below.

The option is per-user and persisted server side. The default for users and for not authenticated users is to hide dismissed modules.

This option affects the ProjectTree (on the left-side of the GUI) and the list of submodules shown when editing the subconfigurations. In the latter case, please note that even if a module is flagged as dismissed, but one of its configurations is attached as subconfiguration, it will be shown in any case.

This functionality allows to automatically update ETICS model and keep it in sync with changes in the source code.

In general terms, it works in the following way:

This process is triggered automatically every time a change in ETICS or in the VCS is detected (e.g. the ETICS Configuration has been modified, a new commit in SVN occurred).

By default, this process is enabled for all configurations. However, its behaviour can be controlled through a set of ETICS properties that can be set in the ETICS Configurations:

In addition, the label #model.sync.ignorefordependencies added at module level (in the module description) excludes that module from being set as dependency in other modules. It is commonly used for dismissed modules when they have locked configurations that have the .coords property (and hence are considered when looking for modules that provides the given maven project).

How to use it

What to do when a new component is created on ETICS? It is enough to set the ETICS checkout and build commands for the ETICS Configuration and the ModelSync will be able to automatically set (and keep aligned) the version and the dependencies.