This document outlines the design rationale, key features, and high-level architecture, as well as the deployment context.

The goal of this service is to offer a single entry point, in a certain scope, for processing, assessing and harmonizing occurrence points belonging to species observations. Data can come from the Species Discovery Service or they could be uploaded from a user by means of a web interface.

The service is able to interface to other infrastructural services in order to expand the number of functionalities and applications to the data under analysis.

This represents an endpoint for users who want to process species observation in order to explore their coherence and to extract some hidden properties from collected data coming from difference sources. This is meant as a complement to other services for species and occurrence points analysis.

The subsystem comprises the following components:

A diagram of the relationships between these components is reported in the following figure: 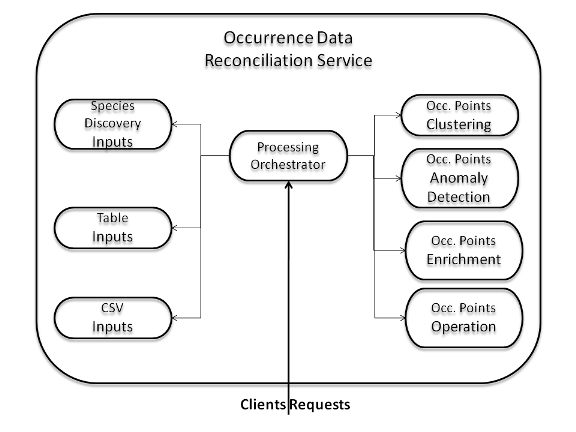 All the components of the service must be deployed together in a single node. This subsystem can be replicated on multiple hosts and scopes, this does not guarantee a performance improvement because it is a management system for a single input dataset.

The deployment follows the following schema as it needs the presence of other complementary services. 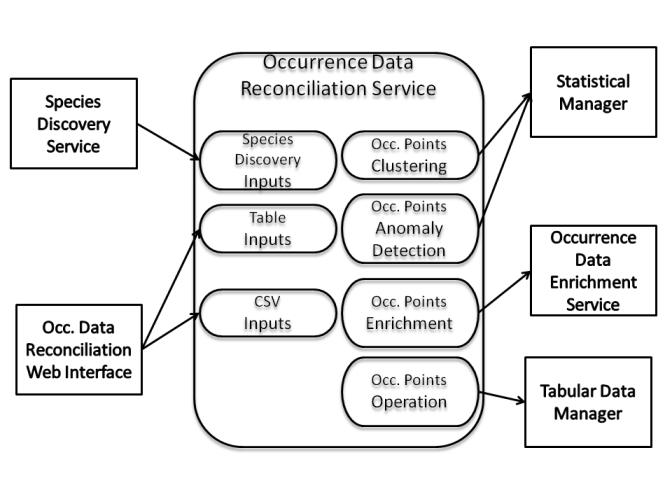 The subsystem is particularly suited when experiment have to be performed on occurrence points referring to a certain species or family. The set of operations which can be applied, even lying on state-of-the-art and general purpose algorithms, have been studied and developed for managing such kind of information.

Occurrence Data Reconciliation Service depends on the following subsystems, where each subsystem specializes along the structure or the semantics of the data: