Part of the Data Access and Storage Facilities, a cluster of components within the system focuses on uniform access and storage of structured data of arbitrary semantics, origin, and size. Some additional components build on the generic interface and specialise to data with domain-specific semantics, including document data and semantic data.

This document outlines their design rationale, key features, and high-level architecture as well as the options for their deployment.

Access and storage of structured data can be provided under a uniform model of labelled trees and through a remote API of read and write operations over such trees.

A tree-oriented interface is ideally suited to clients that abstract over the domain semantics of the data. In particular, the interface is primarily intended for a wide range of data management processes within the system. A generic interface may also be used by domain-specific clients, if its flexibility and the completeness of the associated tools avoid the limitations of more specific interfaces, particularly those that do not align with standard protocols and data models.

The tree interface is collectively provided by a heterogeneous set of components. Some services expose the tree API, and use a variety of mechanisms to optimise data transfer in read and write operations, including pattern languages, URI resolution schemes, in-place updates, and data streams. Other services build on the tree API to publish and maintain passive views over the data.

The services have dynamically extensible architectures, i.e. rely on independently developed plugins to adapt their APIs to a variety of back-ends within or outside the system. Existing plugins adapt the APIs to document repositories that expose OAI interfaces and to sources of semantic data that SPARQL interfaces. A distinguished plugin stores the data locally to service endpoints, providing a scalable storage solution for the system.

When connected to remote data sources, the services may be widely replicated and their replicas know how to leverage the Enabling Services to scale horizontally to the capacity of the remote back-ends. The same plugin mechanism yields a storage solution, in that a distinguished plugin is used to store and access trees locally to individual service endpoints.

The subsystem provides for:

uniform model and access API over structured data
The model is based on edge-labelled and node-attributed trees, and the API is based on a the read and write operations exposed by the Tree Manager services, a suite a stateful WS Services whose instances model data sources that are accessible through the API.

fine-grained access to structured data
The read operations can match and prune trees based on a sophisticated pattern language. They can also resolve whole trees or arbitrary nodes from URIs in a dedicate scheme which are based on local node identifiers. The write operations can perform updates in place, applying the tree model to the changes themselves (delta trees). Both read and write operations can work on individual trees as well as arbitrarily large tree streams.

dynamically pluggable architecture of model and API transformations
The Tree Manager services implement the interface against an open-ended number of data sources, from local sources to remote sources, including those that are managed outside the boundaries of the system. The implementation relies on two-way transformations between the tree model and API of the service and those of the target sources. Transformations are implemented in plugins, i.e. libraries developed in autonomy from the services, and at much lower costs, which extend their capabilities at runtime (dynamic deployment). Plugins may implement the API partially (e.g. for read-only access) and employ best-effort strategies in adapting individual operations to the target sources.

uniform modelling and access API over document data
The generic tree model can be specialised to describe document data. The gCube Document Model (gDM) is used for document management processes within the system, providing rich, aggregated descriptions of document content, metadata, annotations, parts, and alternatives. Based on the gDM, a dedicated plugin of the Tree manager services mediates access to arbitrary OAI repositories or groups of one or more collections found in such repositories;

uniform modelling and access API over semantic data
The generic tree model can be specialised to describe semantic data. This yields tree-oriented views over RDF graph data, which can then be fed to to general-purposes system processes. A dedicated plugin of the Tree manager maintains these views over arbitrary SPARQL endpoints;

load-scalable access to remote data sources
The Tree Manager services may be widely replicated within the system, and their replicas can autonomously balance their state by: i) publishing records of their local activity (activation records) in the Directory Services, ii) subscribing with those services for notifications of records published by other replicas, and iii) processing the notified records so as to replicate the activations of the other replicas . The Directory Services act then as infrastructure-wide load balancers for the state-balanced replicas, pointing clients to least-loaded replicas first.

flexible viewing mechanisms over structured data
The View Manager services are stateful Web Services that build on the tree pattern language to define “passive” views of data sources accessible through the Tree manager services. Views can be published and their summary properties maintained under generic regimes, but the services can be dynamically extended with plugins that customise the management regime for specific classes of views.

rich tooling for client and plugin development
A rich set of libraries support the development of clients and plugins in Java, offering embedded DSLs for the manipulation of trees, patterns, streams, and documents. The libraries also simplify access to remote service endpoints through high-level facades over their remote APIs.

Discovery, indexing, transformation, transfer, presentation are key examples of data management subsystems that abstract in principle over the domain-specific semantics of the data. Other, equally generic system functions are based in turn on those subsystems, most noticeably search over indexing and process execution over data transfer. It is precisely in this generality that lies the main value proposition of the system as an enabler of data e-Infrastructures.

Directly or indirectly, all the processes mentioned above require access to the data. Like in small-scale systems, it is a requirement of good design that they do so against a uniform interface that aligns with their generality and encapsulates them from the variety of network locations, data models, and access APIs that characterise individual data sources.

Providing this interface is essentially an interoperability requirement. For consistency and uniform growth, the requirement is addressed in a dedicated place of the system’s architecture, i.e. for an open-ended number of subsystems rather than within individual subsystems.

The subsystem described in this document fills that space, providing the required interface and the associated development tools.

Tree-based access and storage are collectively provided by the following components:

The following diagram illustrates the dependencies between the components of the subsystem: 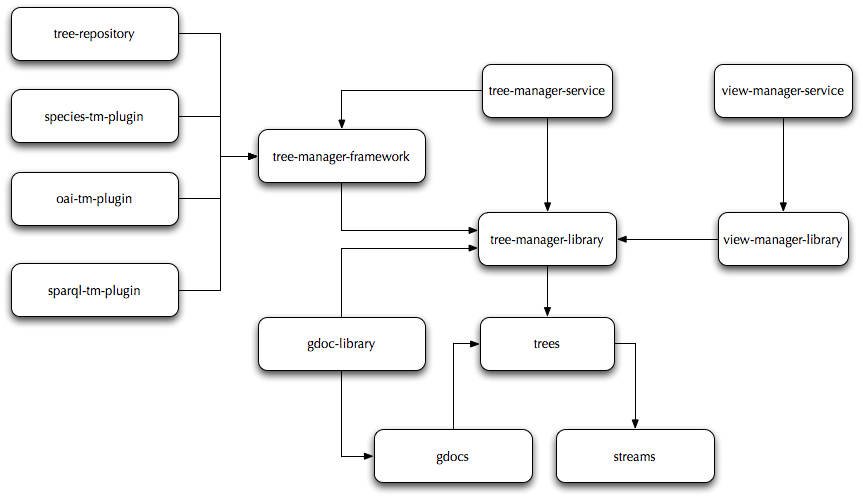 All the components of the subsystem can be deployed on multiple hosts, and deployment can be dynamic at each host. Specifically:

There are no temporal constraints on the co-deployment of services and plugins. A plugin may be deployed on any given before or, more meaningfully, after the service.

Since the services are stateful, a single endpoint may generate and maintain a number of service instances:

Service deployment schemes that seek to maximise capacity will take into account the usual implications of stateful services, whereby the capacity of a service instance:

Endpoints of the Tree Manager services deserve their own considerations however:

A deployment scheme that maximises capacity will tend to create less instances at given endpoints and will reduce co-deployment of other services. Furthermore:

A scheme for large data size concentrates on anchored instances and relies on data sharding across a cluster. This supported is by the graph storage technology that underlies such instances but foregoes dynamic deployment. 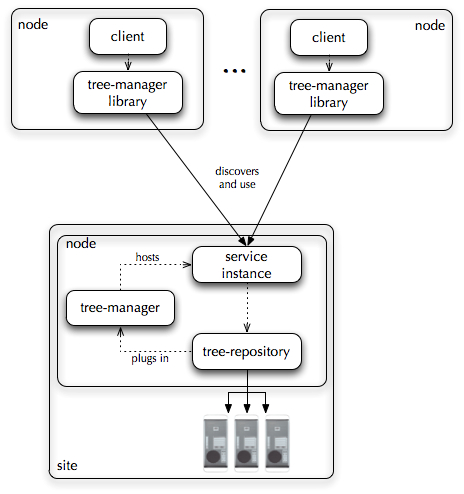 A deployment scheme for the Tree Manager services may also be more conservative in terms of resource consumption in order to maximise their sharing across services.

In this case, the scheme will deploy The Tree Manager services on fewer nodes and alongside other services at each node. Service instances will thus cluster more densely around the available endpoints. Due to the lesser degree of instance isolation, instance capacity will decrease and with it the performance of anchored resources. The scheme is indicated for low-demand resources. 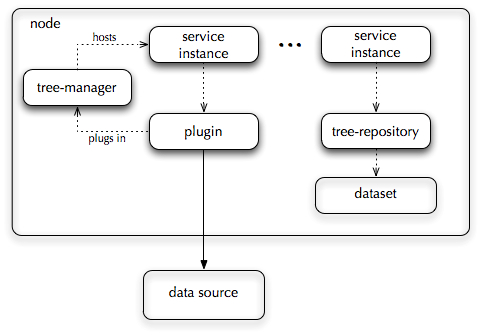 The subsystem is particularly suited to support data management processes that abstract over the domain semantics of the data. The system relies on many such processes to offer, among others, general-purpose indexing, search, transformation, transfer, and presentation functionality.

The development of any plugin of the Tree Manager services immediately extends the ability of the systems to deliver those functions over a new type of data, or over data that originates from a new class of data sources.

This fosters the uniform and rapid growth of the system, and maximises the impact of development efforts. Furthermore, the dynamic architectures of the services lower these efforts with the simpler programming model required by plugin development. As a result, development is more easily opened to third parties.

The generic interface to structured data which is provided by the subsystem will often differ substantially from the native interface provided by data sources. In particular, one or more of the following may hold true at the same time:

the tree interface may offer more powerful data transfer mechanisms than the native interface. For example, the latter may not support streamed operations.

At the cost increased development complexity, some of the issues above may be dealt by appropriate plugin design. However, the solutions may be partial, or result in QoS that are below real-time requirements.

While the required QoS may be met for sources that are static or change infrequently - by importing their contents in anchored instances - clients that work with domain and applications semantics may find little incentive to access data through a generic interface. This is particularly the case when the native interface aligns with formal or de-facto standards that offer more traction and well established tooling within the target domains. Competing with such standards is non-goal for the design of the subsystem.