From Gcube Wiki
Jump to: navigation, search
According to [1]:

A reference model is an abstract framework for understanding significant relationships among the entities of some environment. It enables the development of specific reference or concrete architectures using consistent standards or specifications supporting that environment. A reference model consists of a minimal set of unifying concepts, axioms and relationships within a particular problem domain, and is independent of specific standards, technologies, implementations, or other concrete details.

This section introduces the concepts characterising gCube as a system. Before proceeding, it is fundamental to clarify the fact that gCube is actually composed of two different materialisations: the “living system” users interact with (a.k.a. the gCube Infrastructure) and the “software system” supporting the deployment and operation of the D4Science Infrastructure (a.k.a. gCube framework). Clearly, they are closely related, since the software system is the enabling technology of the living system. This guide focuses on the “software system” but the concepts presented in this reference model characterise both “systems”.

The concepts constituting the gCube Reference Model are organised in different domains:

gCube is a software system conceived to manage an infrastructure consisting of a set of heterogeneous entities that we call gCube resources.

The XML document schema that describe shared commonalities can be found here: XSD

Each resource type is defined thanks to an XML Schema Definition document which describes the distinguishing elements and attributes of the resource type.

In gCube the term “user” identifies entities entitled to interact with the infrastructure. This definition includes not only human users (externals to the infrastructure) but also services (part of the infrastructure itself) autonomously acting in the system. Batch services (e.g. monitoring services) are an example of such type of users that, by reacting to status changes or on a temporal basis, interact with other entities. Thus, some gCube services need to be identified and managed, from the authentication and authorization point of view, as users.

The gCube architecture exploits the Public Key Infrastructure (PKI) paradigm to uniquely identify users in the infrastructure. gCube users are provided with a private key and a public certificate that can be used to authenticate to other entities. Private keys and public certificates are issued and revoked to users by a trusted entity, named Certification Authority (CA). The gCube infrastructure is designed to support CAs acknowledged by the International Grid Trust Federation (IGTF).

In gCube, the Virtual Organization (VO) concept is used to define authorization policies in the infrastructure. A Virtual Organization is a dynamic pool of distributed resources shared by dynamic sets of users from one or more real organizations. Resource Providers (RP) usually make resources available to other parties under certain sharing rules. Users are allowed to use resources under Resource Provider (RP) conditions and with the respect of a set of VO policies.

Following this approach, the gCube VO Model defines a policy as:

a permission for a user to perform an operation on a specific resource.

The gCube VO Model also leverages the concept of role, as introduced by the RBAC model, to decouple the association between users and permissions. Furthermore, roles are organized in hierarchies, thus allowing a natural way to capture organizational lines of authority and responsibility. Role hierarchies are not constrained to be trees; each role can have several ancestors with the only constraint that cycles are not allowed in the structure.

The gCube VO Model is shown in Figure 2. 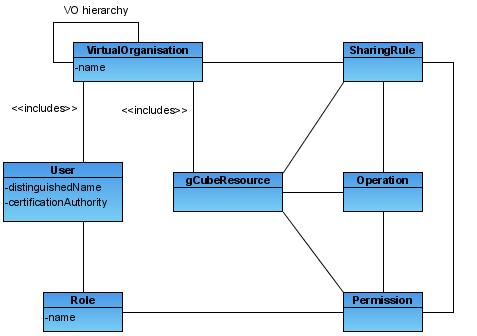 The gCube system relies on a component-oriented Architectural model which subsumes a ‘component-based approach’, i.e. a kind of application development in which:

The components characterising a gCube based system from the architectural point of view have been introduced in the Resource Domain section: all the gCubeResource types with the exception of the ApplicationSpecificResource are considered first class citizens in a component-oriented architecture.

The Architecture Domain itself can be described through different and focused views, capturing a different aspect of this multifaceted domain. Each of these views potentially uses a subset of the architectural components. For example:

The notion of Virtual Research Environment (VRE) is a cornerstone of the whole gCube Infrastructure.

From a user perspective, a Virtual Research Environment is an integrated and coordinated working environment providing participants with the resources (data, instruments, processing power, communication tools, etc.) needed to accomplish the envisaged goal. Such environment has the strong characteristic of being extremely dynamic because of the potential dynamism of the participating community, both in terms of the constituents and requirements.

This also meets the e-Science vision that demands for the realisation of research environments enabling scientists to collaborate on common research challenges through a seamless access to all the resources they need regardless of their physical location. The resources shared can be of very different nature and vary across application and institutional domains. Usually they include content resources, application services combined to produce new knowledge, and computational and storage resources, which physically store the content and support the processing of the services.

From a Resource Domain perspective, a VRE is a pool of gCubeResources dynamically aggregated to behave as a unit with respect to the application context the VRE is expected to serve. Each VRE is a view over the potentially unlimited pool of resources made available through the gCube infrastructure that (i) is regulated by the user community needs and the resources sharing policies and (ii) produces a new VO constraining the scope and usage of resources actors playing in the VRE are subject to.