The integration of the gCube system with FedCloud and, in general, with research/commercial cloud providers, aims to add elasticity to the D4Science infrastructure by allowing programmatic and dynamic creation, configuration and decommissioning of cloud resources on external infrastructures. The benefits of this integration facility for the gCube system are threefold:

Registration and management of cloud providers
Access credentials and cloud resources templates on a per-VRE basis;
Credentials securely stored in the infrastructure;

Accountability and monitorability
Accounting and monitoring data on usage and workload of resources created on the cloud are collected and made available in the infrastructure;
Requisite to comply with D4Science infrastructure policies and for the automatic scale-in/out;

Modular architecture
A plug-in based architecture for an easy integration of new cloud providers;

It is possible to distinguish two possible scenarios: 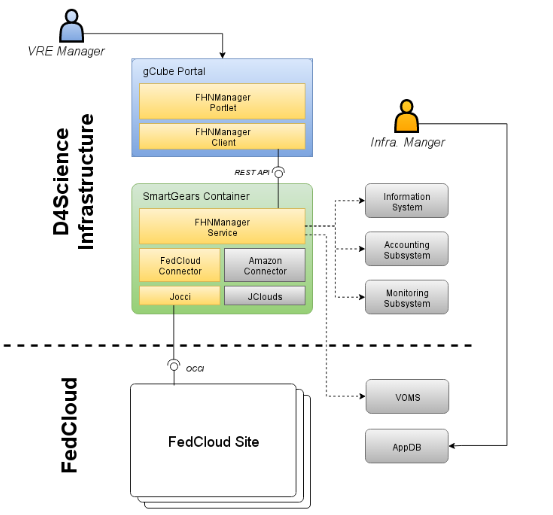 The architecture highlights a number of integration-specific components and their interaction among them as well as with existing components, either belonging to the D4Science infrastructure or to the EGI infrastructure. They are described in the following:

The solution has been developed by means of Java since it is the same technology of the gCube system and it made easier to integrate in the D4Science infrastructure and furthermore, an high availability for third-party libraries implementing cloud standards is available.

A brief description of the service is visible in the following subsections.

The datamodel has been designed with the aim of representing the information related to cloud providers, nodes, templates, accounting and monitoring in a homogenous way independently from the cloud provider exposed API and technology. Connectors and third-party Cloud Libraries ensured a proper translation between the internal datamodel and the specific cloud provider model.

A detailed class diagram of the adopted data model is shown in the following picture. 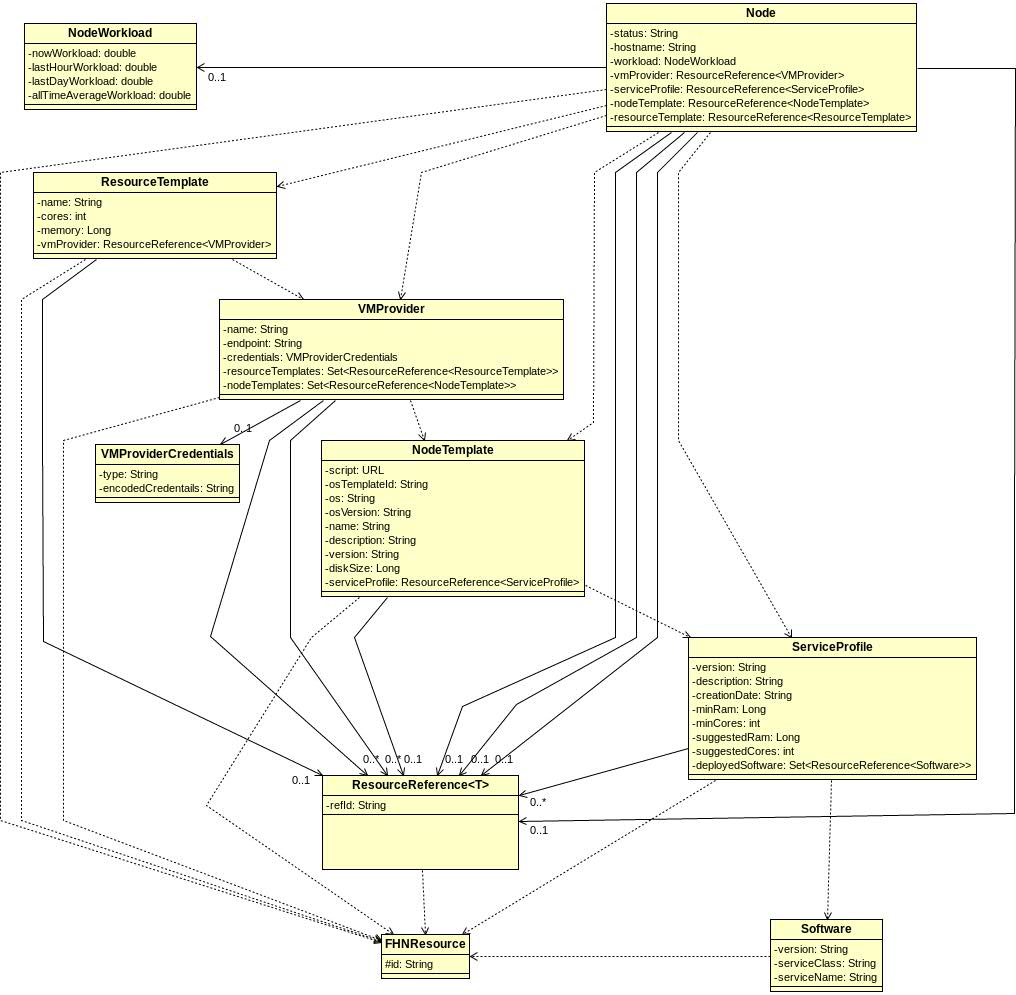 The FHNManager is a web service implemented in Java and running in a gCube SmartGears container. It exposes a REST API that allows to access data on nodes and cloud providers as well as to execute operations to create, destroy, start and stop nodes.

In order to account the usage of cloud provider resources by the D4Science infrastructure, the service relies on the gCube accounting framework provided by the infrastructure: new usage records have been defined to track changes in the lifecycle of the resources on the cloud. Through the connectors, the service also support the fetching of accounting data from the cloud provider (when available).

Concerning the monitoring data, the service implements the support to fetch it from the cloud provider (if available) as well as collect data directly from the resource via the gCube monitoring framework.

The current implementation of the service - and thus the portlet - does not support the registration of new cloud providers along with their associated credentials. However, since the registration entries for cloud providers are maintained in the D4Science Information System, VRE/Infrastructure managers can still use the editing functionalities provided by the Information system itself, although the editing capabilities provided are not tailored to the specific task.

Since the FHNManager is deployed in a SmartGears container, it is automatically registered to the D4Science infrastructure and it is automatically authorized to exploit infrastructure capabilities (Information, Accounting and Monitoring). In addition to properly generate and use X.509 proxy certificates, the host must also be equipped with VOMS clients (i.e. voms-proxy-init) and configured with trusted root certification authorities as distributed by EUGridPMA.

D4Science-FedCloud integration is being tested in the “fedcloud.egi.eu” VO. Production-level operations will be moved to the “d4science.org” VO, registered on the “vomsmania.cnaf.infn.it” VOMS server and in production since December 2015.

The software developed to enable the EGI Federated Cloud support in gCube follows the development process and guidelines defined for the whole gCube platform. The platform source code, kept on the project source code repository is continuously built upon each and every change using the ETICS tool. The components have been included in the last gCube release (ver. 3.11.0). Produced packages are available on the public gCube distribution site.

In order to test the functionalities proposed by the service and according to Client Libraries Framework guidelines, a rest client library has been developed.

The set of RestAPIs call can be performed by using the ClientTest.java class.

Alternatively, it is possible to test the functionalities (that later will be provided by way of the GUI) directly from browser by accessing to:

An example of running service is available here: http://fedcloud.res.eng.it/fhn-manager-service/rest/*