This section introduces the gCube Building Infrastructure. It consists of all machines, networks and software involved in integration, testing, validation and releasing of gCube System's source code.

Few notes on the Fabric Layer

The Building infrastructure is entirely hosted at E-IIS facilities. In order to realize this infrastructure on its datacenter, ENG (namely the Eng's R&D Laboratory) exploited two kind of resources in its own:

This section provide a short description for each component of the Building Infrastructure. We provides details on what components do, their technical specification and interactions with other internal/external components.

A Build Repository is a container for all outcomes related to gCube software builds and tests. Top level directories in the repository corresponds to ETICS project's configurations. Each configuration contains 4 sub-repositories:

In the figure below the typical structure of a Build Repository is shown. 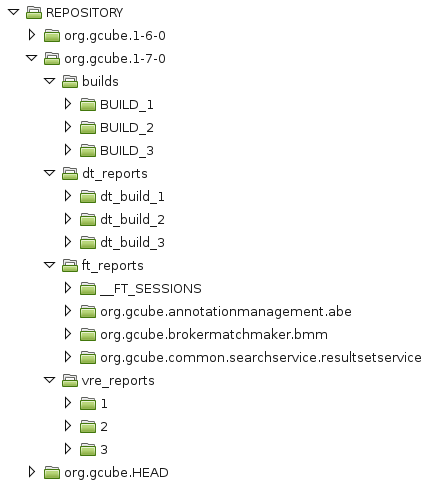 Physically, a repository is implemented as a hierarchic directories structure. Actually the physical implementation matches the logical organization discussed above. As mentioned, the filesystem in which repositories exists is hosted on ENG's SAN infrastructure and, hence, data is stored in reliable and redundant way.

Currently, the only way to access to data from outside ENG network is using the BTRT application.

Build Server is the infrastructure component where gCube Software is actually built. Build Server is a virtual machine properly configured to run gCube builds. It is equipped with an installation of the etics-client to interact with ETICS System, svn commands, java 5 environment, libraries to run checkstyle and findbugs plugins. Build Servers are used to run automatic builds of development and candidate release configurations of gCube, as well as to run un-scheduled manual builds.

Build server is not a physical machine, indeed it is a virtual machine. Relying on virtual machines flexibility, Build Server instances can be started and destroyed on demand. Thus, in the infrastructure, multiple build servers can exist at the same time and this can be exploit to run builds of different configurations simultaneously (very useful during release cycles).

For further information on BTRT, its features and purposes, please refer to BTRT wiki page.

In order to make reports generated during functional tests (carried out on the testing infrastructure) available in BTRT they have to be fetched and saved on a build repository (and, in some cases, processed). The Fetch Server is a pretty simple component that, using cron jobs, automatically looks for new reports at given urls, download and publish them on a build repository.

In order to avoid update anomalies, it is strictly required that in the infrastructure only one Fetch Server exist and is active.