The Workflow Engine is in charge of processing and workflows, i.e. high level plans that bind together conceptual operations for the implementation of a task. As a workflow is a higher level sketch of the activity to be performed, potentially without even reference to executables and resources’ usage, the Workflow Engine operates on top of the ExecutionEngine. Its purpose is to abstract over the low level details that are needed by the ExecutionEngine and the Execution Plan it is provided with.

When the Workflow Engine is acting in the context of the gCube platform, it provides a gCube compliant Web Service interface. This Web Service acts as the front end not only to Workflow definition facilities, but it is also the "face" of the component with respect to the gCube platform. The Running Instance profile of the service is the placeholder where the underlying Workflow Engine instance Execution Environment Providers pushes information that need to be made available to other engine instances. Configuration properties that are used throughout the Workflow Engine instance are retrieved by the appropriate technology specific constructs and are used to initiate services and providers once the service starts.

Orchestration for external computational and storage infrastructures.
Allows users and systems to exploit computational resources that reside on multiple infrastructures in a single complex process workflow.
Native computational infrastructure provider and manager.
Allows full exploitation of the computational capacity of the D4Science Infrastructure by executing tasks directly on the latter.
Handling of data staging among different storage providers.
All Workflow Engine Adaptors handle data staging in a transparent way, without requiring any kind on external intervention.
Unbound extensibility via providers for integration with different environments.
The system is designed in an extensible manner, allowing the transparent integration with a variety of providers, among which environments for storage, resource registries, reporting systems depending on the environment on which the engine is operating.

The Workflow Engine is designed to allow specific third party languages to be parsed and translated into internally used constructs. This task is performed by the Adaptors which can understand these kind of languages. In this way, the Workflow Engine opens up its usability level since existing workflows already defined in third party languages can be easily incorporated. Additionally, the learning curve for anyone wishing to use the execution and workflow capabilities of the system is greatly reduced as depending on one's needs one can simply focus on one of the existing supported languages which will best match the job at hand. Additionally, for the same language, more than one adaptors can be implemented that will offer different type of functionality either by modifying the semantics of the produced Execution Plan or even by incorporating external components to the evaluation. As a constituent part of PE2ng, the Workflow Engine is designed with a layered architecture decoupling the business domain, the infrastructure specific logic and the core execution functionality therefore allowing core re-usage to a multitude of use cases and avoiding sub-optimal compromises of strictly agnostic solutions.

The Workflow Engine comprises a number of adaptors. The following list of adaptors is currently provided:

WorkflowJDLAdaptor
This adaptor parses a Job Description Language (JDL) definition block and translates the described job or DAG of jobs into an Execution Plan which can be submitted to the ExecutionEngine for execution. The plan is executed directly on the working nodes of the D4Science Infrastructure, in this way exploiting the computational resources of the native infrastructure.

WorkflowGridAdaptor
This adaptor constructs an Execution Plan that can contact a gLite UI node, submit, monitor and retrieve the output of a grid job.

WorkflowCondorAdaptor
This adaptor constructs an Execution Plan that can contact a Condor gateway node, submit, monitor and retrieve the output of a condor job.

WorkflowHadoopAdaptor
This adaptor constructs an Execution Plan that can contact a Hadoop UI node, submit, monitor and retrieve the output of a Map Reduce job

In addition to the above Adaptors, which are all contactable through the Web Service interface of the Workflow Engine, two more adaptors have been implemented to satisfy the special purpose requirements of certain applications. These adaptors are contactable only through the client service which employs them and are the following:

WorkflowSearchAdaptor
This adaptor is used by the planner of the gCube Search System in order to translate abstract search plans to concrete Execution Plans, which materialize search tasks executed on the native infrastructure.

WorkflowDTSAdaptor
This adaptor is defined and used by the Data Transformation Service and translates abstract data transformation paths to concrete Execution Plans which materialize transformation tasks and are executed on the native infrastructure.

WorkflowHiveQLAdaptor
This adaptor parses a Hive Query Language (HiveQL) query and translates the described MapReduce job into possibly multiple Execution Plans which can be submitted to the ExecutionEngine for execution, in this way exploiting the computational resources of the native infrastructure.

When the rate of workflow processing tasks to be serviced is expected to be high, more than one Workflow Engine instances, along with their Web Service interfaces should be deployed in the infrastructure. 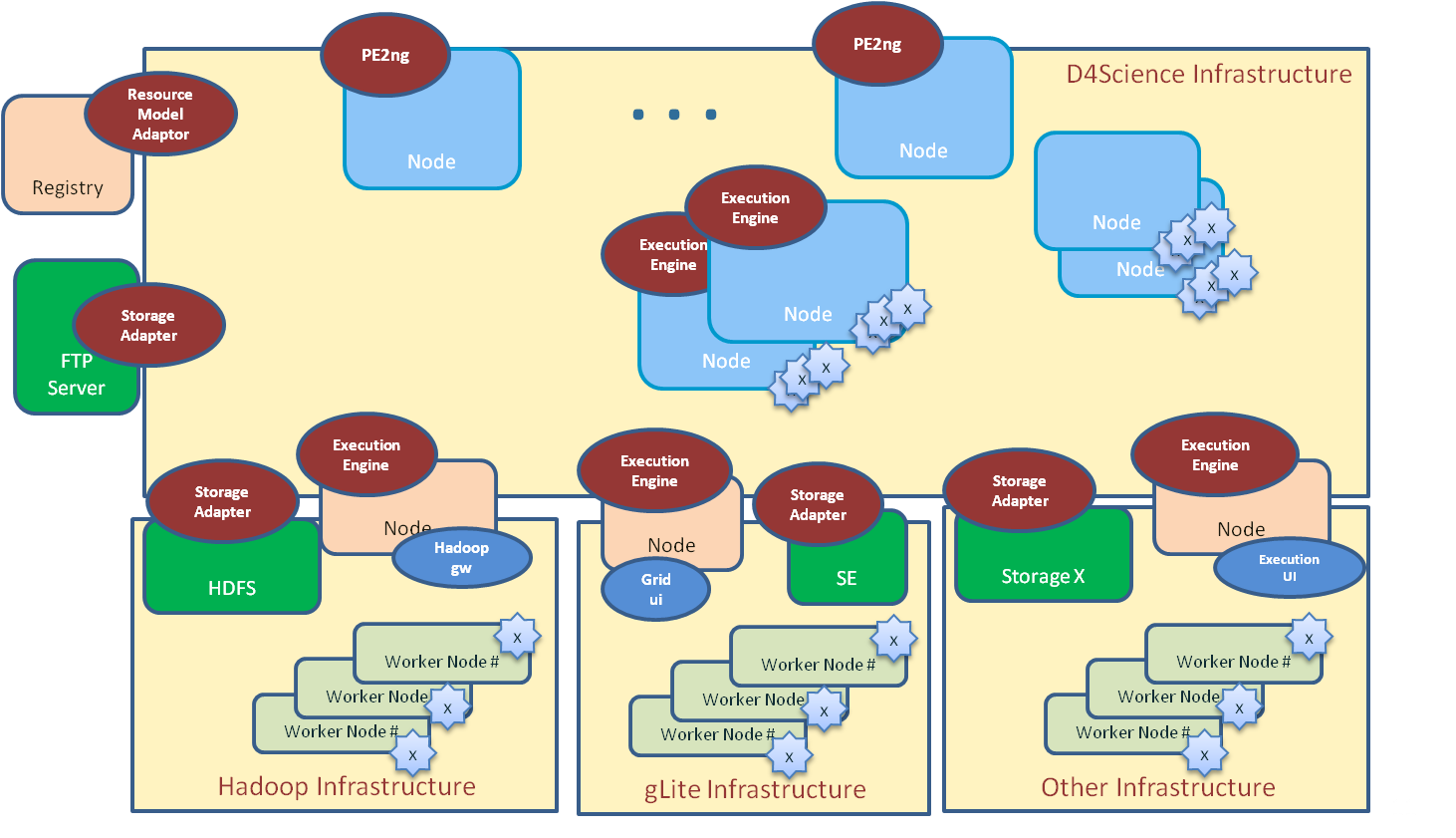 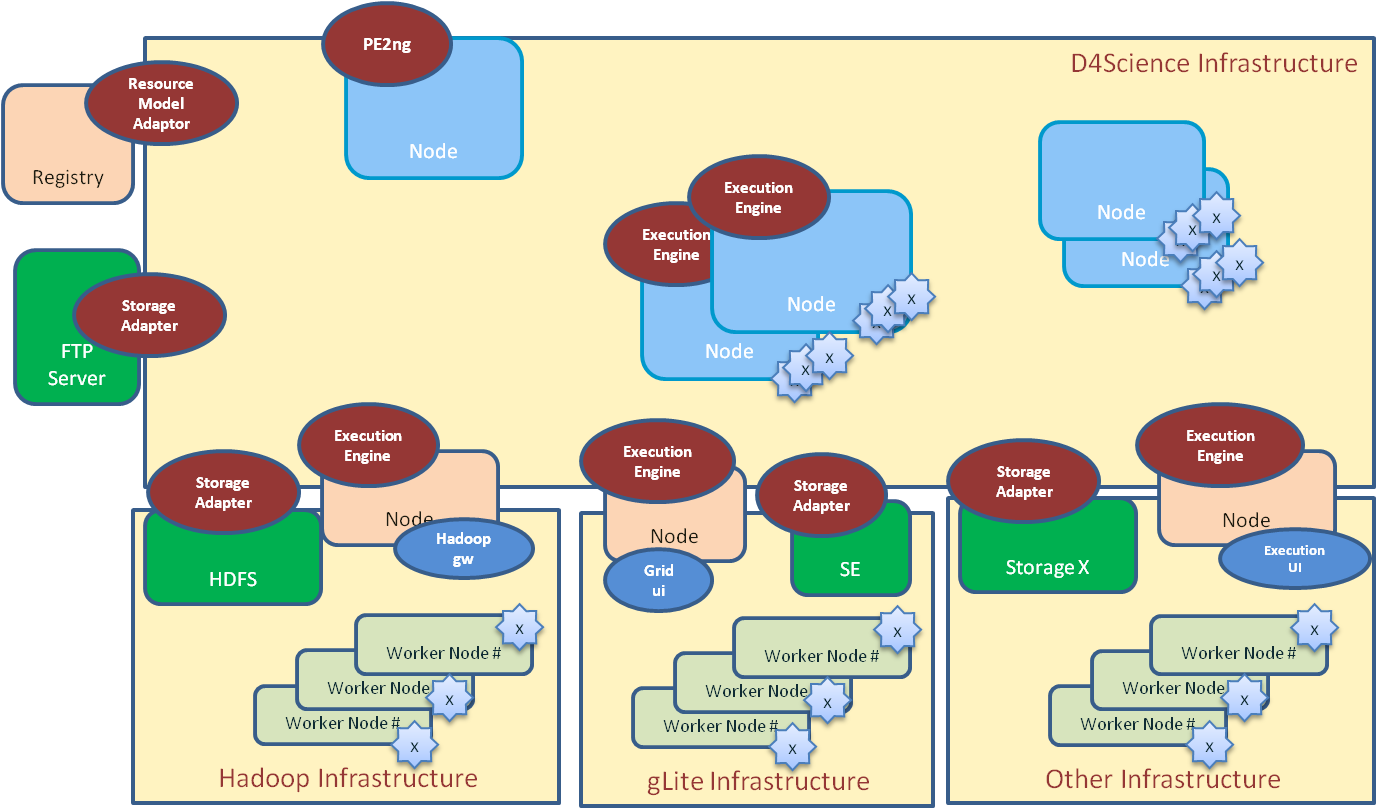 The Workflow Engine does not currently offer advanced features for automatic task parallelization, meaning that this logic should be integrated directly into the implementations of Adaptors. This not only makes the implementation of such Adaptors a non-trivial task but such logic should be implemented for each case separately. Despite this fact not posing a serious problem up until nowdue to the nature of the tasks for which Adaptors were employed, this kind of functionality will be included in the next major version of the Engine, becoming one of its core parts alongside the set of Adaptor.