This document describes the procedures and tools used for the integration and release of Maven-based gCube components. After an initial overview of the overall solution, the document narrow its focus to the integration of Maven components in ETICS.

This document is also an operational guide for developers with all information needed to properly configure a Maven-based gCube component in ETICS to successfully integrate with other components in gCube. It provides also very quick-to-read checklist with the minimal set of things to know and to do in order to let things work in ETICS.

Figure below catches the main components, and their interactions, that are involved in the gCube' software integration, release and distribution. 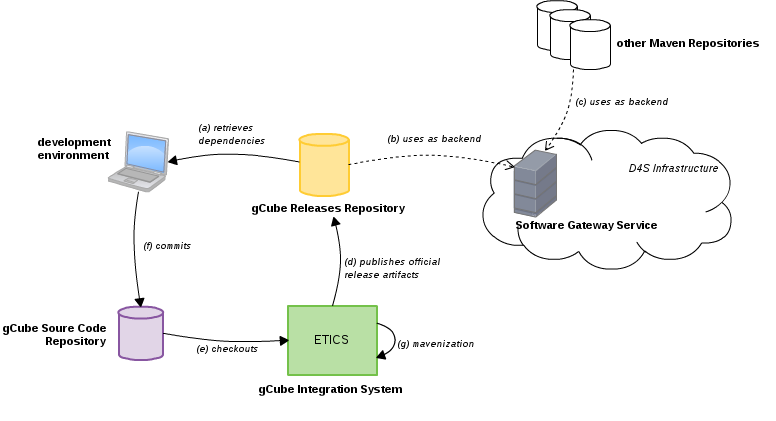 Another central role is played by ETICS: the integration system used by gCube. It is responsible for the publication (d) in gCube Releases of artifacts that comes out from the integration of gCube components. In particular, actions performed by ETICS are:

An identical approach is used also for integration of development version of components. Main differences in this case are:

Bringing Maven to ETICS: the maven-builder

ETICS builds take place on a remote machine on a "empty" environment. In order to properly build Maven components it is needed Maven to be installed and configured on the building machine. All those tasks are performed by an ETICS component created for this purpose called maven-builder.

Briefly, this is what maven-builder provides:

maven-builder is a pre-requisite to build any gCube component in ETICS. All maven-based components must have a direct or indirect dependency on maven-builder. 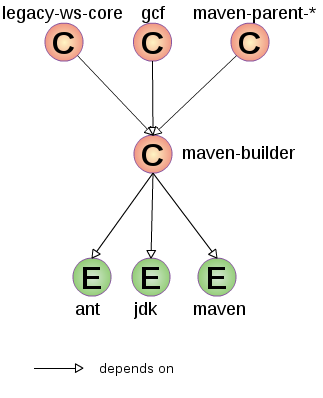 If your components does not functionally depends on any of gcf, legacy-ws-core, 'maven-parent-*, you will have to explicitly set a dependency on maven-builder.

When running Maven in ETICS' integration builds, a set of properties and plugins have to be properly configured in order to let Maven behave as expected. To achieve this result transparently for Developers, it has been decided to have a proxy script for Maven. It is called mvn (like the original Maven command) and the maven-builder replace the original mvn with the proxy script in the PATH. The final result is that when mvn is called from inside a build command of an ETICS configuration, the mvn proxy is invoked instead.

Actions performed by mvn proxy are, in order:

Step 3) is required because we want to ensure a real integration between components: if a component A depends on component B, we want that B is the one compiled in the context of the same build and not another one compiled previously and uploaded on gCube repository. Please note that this does not apply for externals: Maven Central repository is enabled.

Mavenizer is a tool created with the intent of making gCube legacy components compatible with new maven components. It is able to generate maven artifacts starting from outcomes of compilation. It is meant to be used by ETICS during its builds to mavenize legacy components with a twofold benefit:

It provides two commands that must be added in build commands of each legacy configuration: mavenize and mavenize_sa.

This command take as input an artifact that can be .jar, .gar, .war, writes a pom.xml on-the-fly for that artifact and deploys it in the gCube's Maven Repository.

mavenize command determines (if not provided from command line - see below) Maven coordinates groupId:artifactId:version for the artifact it is going to create from the profile.xml file of the component. The algorithm is:

The snippet below shows the input parameters accepted by mavenize script.

All parameters are optional. If a parameter is not provided, mavenize assumes that files are in the standard location for gCube components:

To trigger execution of mavenize on a given legacy component, it is enough to have an invocation to mavenize in the component's ETICS build configuration in target prepublish or postpublish (as shown in figure below). 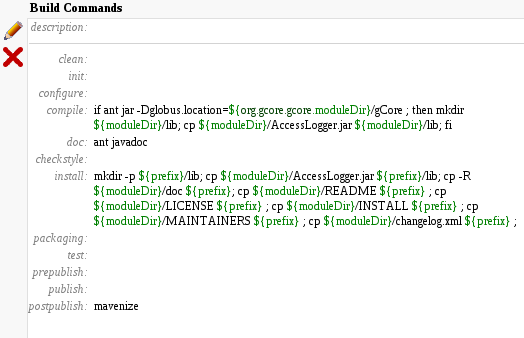 Note: call to mavenize should be already present in all legacy components since it has been added automatically by ETICS administrators.

This command is specific to execute specific actions on legacy servicearchive components. In particular it:

The mavenize_sa accept as input parameter the servicearchive artifact to process. If not provided, it will search for a .tar.gz file into the standard location where ETICS creates packages.

To trigger execution of mavenize_sa on a given legacy servicearchive, it is enough to have an invocation to mavenize_sa in the component's ETICS build configuration in target prepublish

Note: a call to mavenize_sa should be already present in all legacy servicearchive since it has been added automatically by ETICS administrators.